Frogs are one of the oldest vertebrates on this planet. They have survived four mass extinctions, but currently they face rapid decline mostly due to habitat loss, pollution, pesticide use, over harvesting for food, collection for dissection and experimentation, disease, shrinking water sources, lack of conservation awareness and so forth. This has caused the extinction of hundreds of species worldwide.

About one-third of the total amphibian population is threatened with serious risks of extinction. According to the IUCN Red List of Threatened Species, the percentage of threatened amphibian species is above 40 percent, and that’s way higher than for mammals (25 percent) and birds (13 percent). Dissection is a major reason behind the disappearance of frogs. In Nepal, four major species, namely the tiger frog which is listed in Appendix II of CITES (Convention on International Trade in Endangered Species of Wild Fauna and Flora), Nepal cricket frog, Tarai cricket frog and skittering frog are highly exploited for dissection.

Knowingly or unknowingly, the existence of frogs living in close proximity to humans has benefitted us in a multitude of ways. First, tadpoles (the larval stage of amphibians) help in cleaning water resources by consuming organic debris and algae enriching the oxygen content of the water. The adult frog then helps to check vector borne disease carrying insects like mosquitoes and flies. They are also a source of food for many predators like snake, hawk, jackal and wild dog, thus helping to balance the ecosystem. Farmers have always regarded frogs as their friend because they help to control pest infestation that destroys their crops. Scientists know that diminutive animals like amphibians serve as an alarm to humans by playing an exceptional role as bio-indicators. The Newar community has revered frogs from eons as their saviour in the effort to get rid of the mythical demon Ghantakarna. 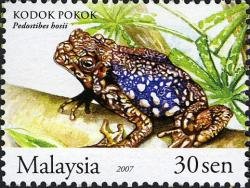