A widespread loss of pollinating insects in recent decades has been revealed by the first national survey in Britain, which scientists say “highlights a fundamental deterioration” in nature. The analysis of 353 wild bee and hoverfly species found the insects have been lost from a quarter of the places they were found in 1980. A third of the species now occupy smaller ranges, with just one in 10 expanding their extent, and the average number of species found in a square kilometre fell by 11.

A small group of 22 bee species known to be important in pollinating crops such as oilseed rape saw a rise in range, potentially due to farmers increasingly planting wild flowers around fields. However, the scientists found “severe” declines in other bee species from 2007, coinciding with the introduction of a widely used neonicotinoid insecticide, which has since been banned.

Researchers have become increasingly concerned about dramatic drops in populations of insects, which underpin much of nature. Some warned in February that these falls threaten a “catastrophic collapse of nature’s ecosystems”, while studies from Germany and Puerto Rico have shown plunging numbers in the last 25 to 35 years.

The study, published in the journal Nature Communications, is based on more than 700,000 sightings made by volunteers across Britain from 1980 to 2013. These are used to map the range of each species of bee and hoverfly over time. The data did not allow the assessment of numbers of insects, but some researchers think populations have fallen faster than range.

Pollination is a critical ecosystem service underpinning the productivity of agricultural systems across the world. Wild insect populations provide a substantial contribution to the productivity of many crops and seed set of wild flowers. However, large-scale evidence on species-specific trends among wild pollinators are lacking. Here we show substantial inter-specific variation in pollinator trends, based on occupancy models for 353 wild bee and hoverfly species in Great Britain between 1980 and 2013. Furthermore, we estimate a net loss of over 2.7 million occupied 1 km2 grid cells across all species. Declines in pollinator evenness suggest that losses were concentrated in rare species. In addition, losses linked to specific habitats were identified, with a 55% decline among species associated with uplands. This contrasts with dominant crop pollinators, which increased by 12%, potentially in response agri-environment measures. The general declines highlight a fundamental deterioration in both wider biodiversity and non-crop pollination services. 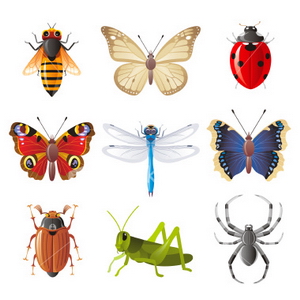