The first analysis of new monitoring data reveals that British freshwaters are heavily contaminated with neonicotinoids. Half of the sites monitored in England exceed chronic pollution limits and two rivers are acutely polluted. Aquatic insects are just as vulnerable to neonicotinoid insecticides as bees and flying insects, yet have not received the same attention because the UK Government has not responded to calls to introduce systematic monitoring.

However, under the EU Water Framework Directive ‘Watch List’ initiative the UK was required to introduce a pilot monitoring scheme for all five commonly used neonicotinoids – Imidacloprid, Clothianidin, Thiamethoxam, Acetamiprid and Thiacloprid. Twenty-three sites were sampled in 2016, 16 in England, four in Scotland, three in Wales and three in Northern Ireland. The Northern Ireland data has yet to be released to the public.

88% of samples in Britain were contaminated with neonicotinoids, eight rivers in England exceeded recommended chronic pollution limits, and two were acutely polluted. Populations of mayflies and other insects in these rivers are likely to be heavily impacted, with implications for fish and bird populations.

The River Waveney on the Norfolk/Suffolk Border was the worst polluted river with the acute harm level exceeded for a whole month and the River Wensum in Norfolk, a Special Area of Conservation for its river life, was also chronically polluted. These rivers supply the Broads, an internationally important wetland site and home to many endangered aquatic animals. Sugar beet fields are the most likely source of pollution in these rivers.

The River Tame, an almost entirely urban river in the West Midlands was only monitored twice, and the second reading was very high, indicating a probable industrial or disposal pollution event. Initial enquiries with the Environment Agency suggest that there has, as yet, been no regulatory or policy response to the high levels of pollution detected, nor to the apparent pollution incident.

Concerns are raised about the levels of imidacloprid recorded in rivers, including urban rivers and a remote Scottish stream in the Cairngorms. Imidacloprid is now a rare arable insecticide, but its high persistence in soil means that it will continue polluting water in arable areas for years to come. However, it is still used in greenhouses, which are known to be a particular pollution risk to water bodies and is used as a flea treatment on pets. The most likely source of pollution in the Cairngorms is a treated dog entering the stream.

“We are devastated to discover that many British Rivers have been heavily damaged by neonicotinoid insecticides. It is vital that action is taken to completely ban these three toxins, including in greenhouses and on pets, before another year of disgraceful pollution occurs.” Matt Shardlow, CEO, Buglife.

“Three years ago, the Angling Trust pressed the Environment Agency to sample neonicotinoids in rivers after academic papers showed that they can have a significant impact on insects, the main food for most fish. These results are highly alarming in the context of widespread declines in aquatic insect life and fish populations. We urge the government to act urgently to ban continued use of these chemicals to protect wildlife, fisheries and drinking water supply.” Mark Lloyd, CEO, Angling Trust and Fish Legal.

“Recent history has shown how agricultural chemicals which we initially thought were safe have proven extremely damaging to the environment and our wildlife. The Rivers Trust works closely with farmers and growers to reduce and better target chemical and fertiliser usage, however some chemicals are just too damaging and persistent to be tolerated.” Arlin Rickard, CEO, of The Rivers Trust. 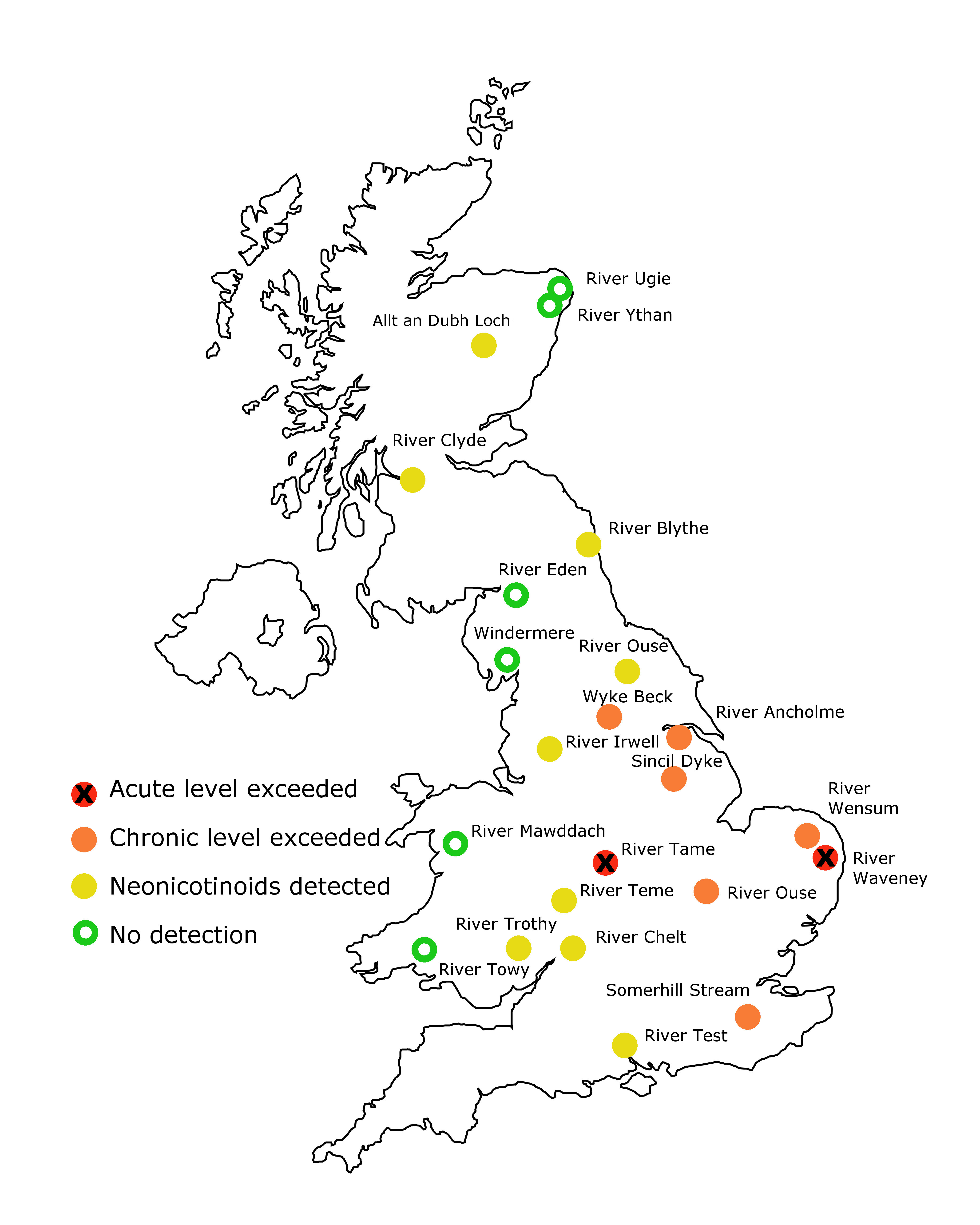